Dedication: a portrait of the past 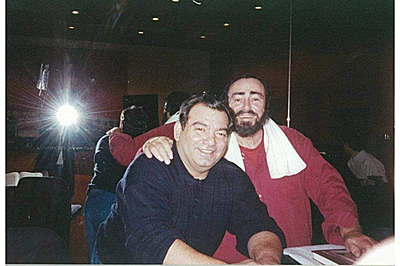 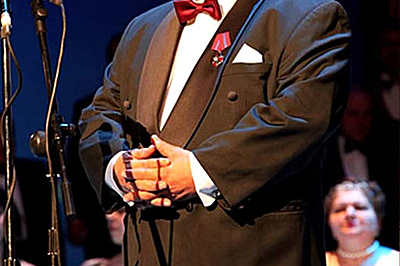 "I first met Gegham Grigoryan a few years ago, in the early 90s, by chance and unexpectedly. When Reuters director Stephen Somerville, his wife, Mary Ellen, and I entered the Royal Opera House in London, it turned out that Luciano Pavarotti, who had arrived in London, had fallen ill and, unfortunately, could not sing in Verdi's Un Ballo in Maschera (A Masked Ball) that evening. Gegham Grigoryan would replace him. The anxiety of the audience was noticeable. "Do you know who the singer is replacing the famous and "incomparable" Pavarotti?"

After the performance, my friends and all the spectators who had come to listen to Pavarotti stood up and applauded Gegham Grigoryan for a long time. This was his great victory to break the prejudice of the people about Pavarotti's uniqueness and absoluteness and to capture the London Opera overnight.

When I met Gegham behind the stage after the performance, my opinion changed. He was not a victorious singer but a simple, kind, and happy man in rest after work. I realized that victories are something usual for this singer.

It was July of 2000, a cold London summer. People even wore coats in the evening or simply preferred to sit in front of fireplaces in their homes. But in the city centre, around the Royal Opera House, there was an unspeakable activity every night. The Mariinsky Theatre of Opera and Ballet - St. Petersburg began its performances at the Royal Opera House.

The theatre had a tour in London for a month and was a resounding success, presenting five ballets and five operas twenty-four times.

Thanks to the theatre's chief conductor and artistic director Valery Gergiev, the 500-member staff of the Mariinsky Theatre worked as one person. The English press wrote about Gergiev's energy, charm, and especially his dynamic conducting, owing to which he managed to maintain, develop, and promote the theatre for the past twelve years.

As every Armenian would do, I opened the list of theatre staff on the very first day of the tour in order to find an Armenian name. Gegham Grigoryan was to sing at the invitation of Valery Gergiev in Prokofiev's War and Peace opera.

On July 15, the Royal Opera House was packed. It was the last performance of Mariinsky tours.

Bezukhov performed by Gegham Grigoryan was flawless. Gegham's perfect stage behaviour, absolutely correct control of voice and breathing enchanted the London audience, who greeted Gegham with long applause at the end of the performance. About four hundred people, including the choir and the orchestra, participated in the performance War and Peace by the famous Russian film director Andrei Konchalovsky. In this monumental musical work, it was not easy to present the image of Pierre Bezukhov full of complexes. However, owing to his long-term stage experience, artistic talent, and, let us not forget the most important, his wonderful voice, Gegham achieved incredible success.

Gegham Grigoryan was ten years old when he realized that he was an innate singer, but on the advice of experts, he did not sing until his early adolescence. He studied at the Yerevan State Conservatory and developed his voice at La Scala. Gegham joined the Mariinsky Theatre in 1989, before which he sang at the Vilnius Opera House for many years. He performed in many countries, both as a guest tenor and with the Mariinsky Theatre. The list of his roles is rich and diverse: Pierre Bezukhov (War and Peace), Duke (Rigoletto), Lensky (Eugene Onegin), Alfredo (Traviata), Radames (Aida), Faust, Don Carlos, and many others. Gegham Grigoryan first sang at the Royal Opera House in London in 1993; later, he became one of the theatre's favourite singers.

Despite the busy schedule of the tours, Gegham Grigoryan later took on another responsibility. He became the artistic director of the Yerevan National Academic Opera and Ballet Theatre. Starting this responsible and hard work, he decided to take our opera and ballet out of the barrier of silence, which requires a lot of courage and a lot of work.

"We have wonderful young voices, but we do not have means to bring them to the big stage," says Mr. Grigoryan. - "There are excellent ideas to bring our opera and ballet to the international arena, which, in addition to ideas, requires work and money."

For that purpose, one of Gegham Grigoryan's practical proposals became to create a "membership of the friends of the Yerevan State Academic Opera and Ballet Theatre."

It is worth uniting and helping Gegham Grigoryan and his supporters and "setting up" the Yerevan Opera and Ballet Theatre, as Gegham says.

We wish the theatre to restore its former glory and become one of the most powerful symbols of modern Armenian culture."

Gegham's daughter Hasmik Grigoryan and I recently remembered and regretted that Gegham was no longer with us to see Hasmik's extraordinary fame around the world.

Hasmik, a soloist at the Lithuanian National Opera and Ballet Theatre, has charmed the audience of some operas around the world with her voice, stage skills, and beauty over the last decade. The New York Times recently called her A Soprano with a Bottomless Appetite for Risk, i.e., a soprano who is not afraid of anything. Norman Lebrecht, the most famous and demanding music critic in England, called Hasmik "a soprano who appeared like a comet in the world of opera." Hasmik often sings in Yerevan. However, it is not only Hasmik who must preserve Gegham's name and reputation but also our entire opera house and our society.

Let us hope and wish that the Yerevan State Academic Opera and Ballet Theatre after Spendiaryan, which has always been an important institution representing Armenian culture, will continue the long-standing traditions of Gegham Grigoryan and the Armenian society and remain culturally significant and famous thanks to talented Armenian singers, musicians, and ballet dancers.