President of the Republic of Armenia 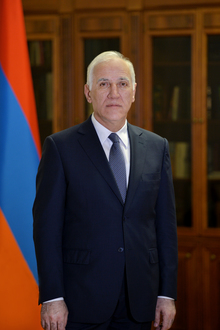 Vahagn Garniki Khachaturyan was born on 22nd of April, 1959, in Sisian. In 1976, he graduated from Yerevan Secondary School Number 118 with excellence.

In 1976-1980 he studied at the Yerevan Institute of National Economy, obtaining the qualification of economist.

From 1982, he worked at the “Hrazdanmash” production association as an economist, he was the head of the economic research laboratory.

From 1988, the beginning of the Karabakh movement, he actively took part in social and political activities.

In 1995 he was elected as a Deputy of the First Convocation of the National Assembly of Armenia, a member of the NA Standing Committee on Financial-Credit and Budgetary Affairs.

In 2000, he was a Founding Member of “Armat” Democracy and Civil Society Development Centre.

In 2006, he was a Founding Member of “Alternative” Socio-Political Initiative.

From 2013 to February 2022, he was a member of the "Armenian National Congress" party and head of the Economic Committee.

From 2019 to 2021, he was an independent member of the Board of Armeconombank OJSC.

On 4th of August, 2021, he was appointed Minister of High-Tech Industry of the Republic of Armenia.

On 3rd of March 2022, Vahagn Khachagturyan was elected as the 5th President of the Republic of Armenia at the special sitting of the RA National Assembly

He is the translator and author of scientific and professional articles, economic and political science books.

He is married, has 2 children and 2 grandchildren.