The fourth President of the Republic of Armenia 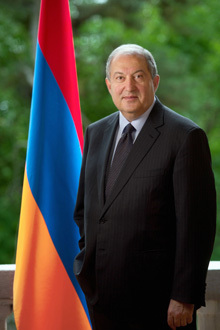 Mr. Armen Sarkissian,
The President of the Republic of Armenia

In 1976 Mr. Sarkissian graduated from the Department of Physics of the Yerevan State University.

In 1978 he completed post-graduate studies at the Chair of Theoretical Physics and Mathematics at the Yerevan State University and was awarded a scientific degree of the Doctor of Science.

In 1976-1990 Mr. Sarkissian was Professor of Physics at the Yerevan State University. In the mentioned period of time, Armen Sarkissian founded the Sub-Division for Computer Modelling of Complex Systems at the Department of Theoretical Physics of the YSU.

In 1984-1985 Armen Sarkissian was first a Visiting Researcher and later Professor at the Institute of Astronomy in the University of Cambridge, United Kingdom.

In 1986-1992 Mr. Sarkissian continued his professional career as a Research Fellow and Visiting Professor at the Moscow State University, as well as in various universities in Germany, US, Greece, and the United Kingdom.

In 1992-1996 Armen Sarkissian was Armenia’s Senior Ambassador in Europe, Ambassador to the European Union, Belgium, the Netherlands, Luxembourg, Vatican, and the Head of Mission of the Republic of Armenia to the EU.

1998- 2000 Mr. Sarkissian was reappointed as Armenia’s Ambassador to the UK and Vatican.

In 2000-2013 served as a Special Advisor of the President of the European Bank for Reconstruction and Development and Governor of EBRD, Founding President of the Eurasia House International, Founder and Director of the Eurasia Centre at the Cambridge University’s Judge Business School, Chairman of Global Council on Energy Security (WEF Forum), Co-Chair of the East West institute (EWI). He also became the Founder of the High Power Annual Conference at the Cambridge University Commission, member of the Euro-Atlantic Security Initiative (Chair of Energy Security), the Founding President of the British-Armenian All Party Parliamentary Group, Board Member of the Global Leadership Foundation (GLF), member of the Dean’s Advisory Council at the Kennedy School of Government, Harvard University; member of the Dean’s Advisory Council at the Harris School of Public Policy Studies, University of Chicago; John Smith Trust member, London, UK; Board Member of the Armenian General Benevolent Union, Founder of the Yerevan, My Love Benevolent Foundation, etc.

In 2001-2013 Armen Sarkissian was a Senior Advisor to British Petroleum, Alcatel, Telefonica, Bank of America Merrill Lynch and other multinational corporations.

On March 2, 2018, Armen Sarkissian was elected President of the Republic of Armenia  by the  National Assembly of  the RA. The inauguration of the President-elect took place on April 9, 2018.

In 2017 Mr. Sarkissian was awarded the first degree medal For Services to Homeland.

In 2008 Mr. Sarkissian received the St. Gregory the Illuminator medal from His Holiness Garegin II, Catholicos of All Armenians.

In 1997 he received the St. Gregory the Great Order from His Holiness Pope John Paul II.

Mr. Sarkissian holds the diplomatic rank of Ambassador Extraordinary and Plenipotentiary of the Republic of Armenia.

He is married to Mrs. Nouneh Sarkissian, the couple has two sons and three grandchildren.