Mrs. Nouneh Sarkissian hosted the Director of the Sharjah Institute for Heritage 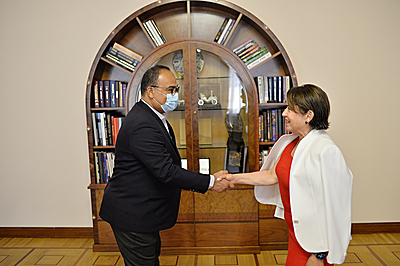 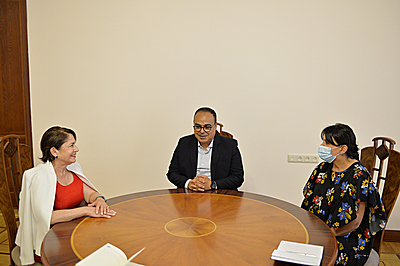 Mrs. Nouneh Sarkissian, the wife of the President of the Republic, hosted Abdulaziz Al Musallam, Director of the Sharjah Institute for Heritage, one of the most prestigious cultural institutions in the United Arab Emirates.

Mrs. Sarkissian visited the Sharjah Institute for Heritage two years ago; it was then that they had agreed to develop and implement joint cultural programs. In particular, the wife of the President of the Republic had offered the leadership of the Institute to cooperate with the Matenadaran, the Mesrop Mashtots Research Institute of Ancient Manuscripts, telling Director Abdulaziz Al Musallam about the restoration laboratory and emphasizing that Armenian specialists can train the staff of the Sharjah Institute for Heritage to restore ancient manuscripts. Abdulaziz Al Musallam liked the idea and decided to visit Armenia as a follow-up to the meeting in the UAE.

In Armenia, the Director of the Sharjah Institute for Heritage visited different regions and cultural and scientific-educational institutions. In particular, Abdulaziz Al Musallam briefed Mrs. Sarkissian on his visit to the Matenadaran, where he got acquainted with the Armenian manuscript heritage and the best examples of Arabic manuscripts, the second large collection after the Armenian manuscripts kept at the Research Institute. He said that they also agreed to implement exchange programs for the staff members of the two institutions.

Mrs. Nouneh Sarkissian attached importance to deepening and expanding the cultural ties between the two friendly peoples. "We have fraternal relations with the United Arab Emirates, and we will be happy to strengthen those relations through cultural exchange programs. The basis of any relationship is culture," said Nouneh Sarkissian. As the best example of warm bilateral relations, she particularly mentioned the renovation of the Haghartsin monastery complex with the help of Sharjah Ruler Sheikh Sultan bin Mohammad Al-Qasimi years ago.

At the meeting, Abdulaziz Al Musallam offered to invite Armenia in 2022 as an honorary guest to the "Sharjah Heritage Days" cultural festival organized every year in Sharjah. Welcoming the idea, the President’s wife Nouneh Sarkissian suggested that a Sharjah Cultural Week should be organized in Armenia as well. Both sides also discussed the possibility of holding bilateral sports events, in particular, organizing junior table tennis competitions.