Mrs. Nouneh Sarkissian had a distant conversation with the students and teaching staff of the Karen Jeppe school of Aleppo: to reinforce Armenia-Diaspora bridge, it is necessary to ensure connectivity between the generations on the both sides of the bridge 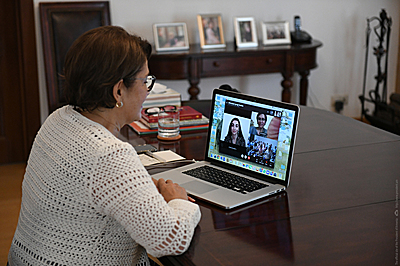 In the framework of the distant meetings with the Armenian educational establishments abroad, the spouse of the President of Armenia Nouneh Sarkissian this time spoke via internet with the students and teaching team of the Karen Jeppe school in Aleppo.

Online meetings like these are aimed at the strengthening of Armenia-Diaspora ties through the educational institutions.

The parties discussed issues related to the development of the Western Armenian language and events which under the pandemic will keep strong relations between Armenia and educational establishments of Diaspora. This also creates opportunities for the schoolchildren to interact. Toward that end, during the online meetings, Mrs. Sarkissian has proposed a number of ideas and initiatives. One of them is the Friend of the Pen initiative. In the framework of this initiative schoolchildren in Armenia and their peers abroad will exchange letters with the use of modern technologies. During the conversation with the students and teaching staff of the Karen Jeppe school in Aleppo, Mrs. Sarkissian spoke of the importance of the two branches of the Armenian language, Eastern and Western and dialects. She noted that dialects are the assets of our language. She urged the students to study Eastern Armenian and master it is as well as the Western Armenian.

In this context, Mrs. Nouneh Sarkissian spoke about the Friend of the Pen initiative and underscored that it would allow not only to improve further their Armenian but also to interact actively with their peers in Armenia. Mrs. Sarkissian informed that two schools in Armenia – Levon Adamian Secondary school in the Nerqin Karmiraghbyur community in Tavush marz and Academic school in Gyumri of Shirak region and accepted gladly the opportunity to connect with the school in Aleppo. “Taking into consideration the recent events in Tavush, children residing there need special attention,” Mrs. Nouneh Sarkissian said. She expressed hope that lasting friendly relations between the schoolchildren would be formed and Armenian children from Aleppo during their future visit to Armenia would meet in Tavush and Gyumri with their friends and peers.

Recently, based on the Friend of the Pen approach a meeting took place between the national school in Kuwait and Hakop Oshakan school in Yerevan and as a result the two school were declared sister-schools.

An interesting agreement has been reached in the framework of the Friend of the Pen initiative. Mrs. Sarkissian encouraged the students and teaching staff of the national school in Kuwait and Oshakan school to exchange their emails during the distant meeting and establish communication. At the moment, another proposal of Mrs. Nouneh Sarkissian addressed to the students of the national school in Kuwait in underway: it is a poetry context in the Western Armenian and September 1 is the deadline. The results will be announced on September 21 - Armenia’s Independence Day. To the students of the Aleppo school Mrs. Sarkissian offered to conduct a Western Armenian-Eastern Armenian translation competition. The winners will receive awards from the President of Armenia. Another idea – to exhibit the photos of the place they live online – was approved by the students and teachers alike. The best works will be installed in Haykashkharh and kids’ portal of the Presidential site. “Our goal is to establish a bridge between Armenia and Diaspora. I am from Yerevan but have been connected to Spyurk all my life. I highly value the role of Diaspora. Armenians are two-times more powerful as a nation because there is a link with Diaspora. To reinforce the Armenia-Diaspora bridge, we have to ensure that future generations are connected. I hope that after virus is defeated, we will interact not only remotely but also physically, face to face, especially our children,” Mrs. Sarkissian underscored.

In the second segment of the discussions, the teaching of the Aleppo school presented issues related to the difficulties of distant learning under the coronavirus pandemic. They hailed Mrs. Nouneh Sarkissian’s proposals and expressed readiness to implement them. At the conclusion of the conversation, Mrs. Nouneh Sarkissian wished the participants of the meeting good health and expressed hope that this kind of discussions would continue.