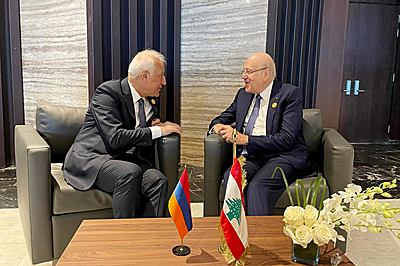 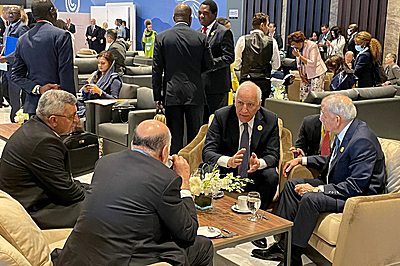 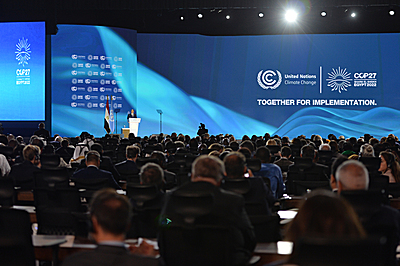 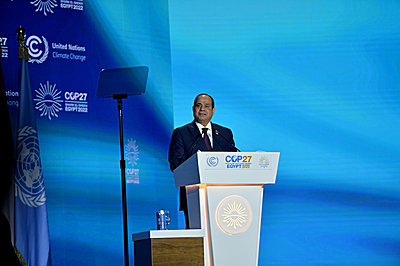 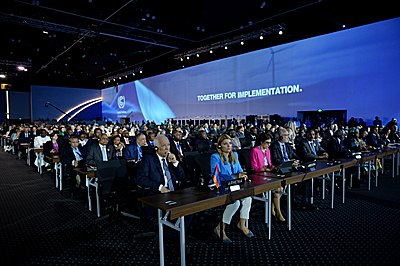 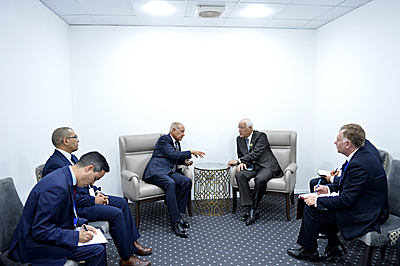 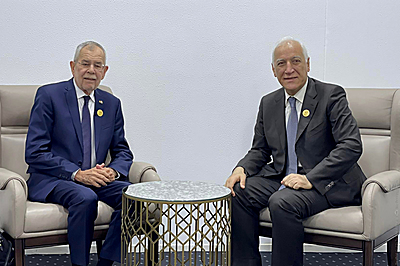 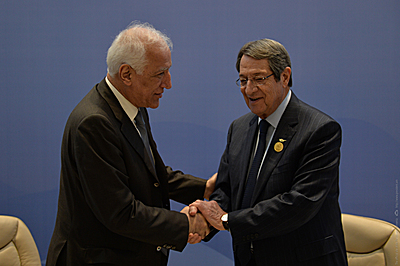 Within the framework of the 27th Conference of the Parties to the United Nations Framework Convention on Climate Change, President Vahagn Khachaturyan had a meeting with the President of Iraq Abdul Latif Rashid.

President Vahagn Khachaturyan noted that Iraq is considered to be Armenia’s reliable partner in the region and our country finds it highly important to deepen the multi-sector cooperation with that country.

The President of Iraq noted that the Armenians living in Iraq enjoy the support of the Iraqi Government and that they highly appreciate Armenian-Iraqi close relations. According to him, in the recent years, there’ve been positive dynamics in the bilateral trade turnover, which is a sign of serious bilateral economic potential, and we should make efforts to realize it.

President Vahagn Khachaturyan highlighted that Armenia is in amazing relations with the vast majority of Islamic countries, including Arab countries. Within this context, President Khachaturyan expressed concern over the recent speech that the President of Azerbaijan Ilham Aliyev delivered in the framework of the Arab League summit, where he manipulated the religious factor in his accusations against Armenia, adding a religious color to the conflict of Nagorno Karabakh and trying to set up the Islamic, in this case Arab countries against Armenia. President Khachaturyan strongly emphasized that there isn’t and can’t be any religious aspect or content in the Nagorno Karabakh conflict, as the Armenians of Nagorno Karabakh are fighting for their right to live and create safely in their homeland.

The sides agreed on continuing the mutual contacts aimed at the development of economic relations and activation of cooperation in various fields.

Within the framework of the 27th Conference of the Parties to the United Nations Framework Convention on Climate Change, President Vahagn Khachaturyan had a meeting with the Lebanese Caretaker Prime Minister Najib Mikati

Welcoming President Khachaturyan, the Prime Minister emphasized that Armenian-Lebanese relations are based on the best traditions both from political and trade viewpoints. President Khachaturyan noted that Lebanon is one of the most long-standing friends of Armenia in the Arab world, and contacts and cooperation with Lebanon have wide opportunities for constant tightening and development.

During the meeting, Vahagn Khachaturyan drew his Lebanese partner’s attention to the speech the President of Azerbaijan Ilham Aliyev delivered lately during the Arab League 31st summit, where he tries to present the Karabakh conflict as a manifestation of religious intolerance, making reference to the destroyed mosques.

President Khachaturyan highlighted that the statements of the President of Azerbaijan have no links with the reality, Armenia has many friends in the Muslim world, and the mentioned destroyed mosques refer to the Soviet Union period, when there was an equally negative state policy toward all the religions, and there are many destroyed churches referring to that period as well.

The Prime Minister of Lebanon noted that he was present at the summit and expressed an opinion that to evade such misunderstandings, Armenia should activate its efforts aimed at building closer relations with the states of the Arab world.

On November 7, President Vahagn Khachaturyan delivered a speech at the 27th Conference of the Parties to the United Nations Framework Convention on Climate Change held in Sharm El Sheikh.

The President noted that Combating climate change is a critical component of the global agenda, which requires a shared commitment of us all.

“Climate change evolves faster than expected. The entire mankind not only witnesses this change, but is also affected by it. Ecosystems are at risk, water resources are running dry, floods, storms, forest fires, extreme heat and drought become more frequent,” noted the President.

Impacts of war on ecosystems vary, depending on the magnitude and duration of a conflict, as well as the types of weapons used.

Regretfully, recently Armenia experienced such a challenge. On September 13 this year Azerbaijan initiated an aggression, targeting the sovereign territory of Armenia. Densely populated towns of the eastern and south-eastern regions of Armenia, including city of Jermuk, a well-known mountain spa town and popular destination for medical tourism, came under heavy fire. The hostilities with the use of a wide range of weaponry, including artillery and combat UAVs against the settlements were accompanied by causing a heavy damage to the unique environmental complex. The shelling of the Kechut water reservoir had a potentially catastrophic human toll and environmental impact.”

President Vahagn Khachaturyan highlighted that despite the existing challenges and security concerns in Armenia, the climate change agenda continues to remain priority for the Government.

“Particularly, climate resilience and low-carbon development are recognized as a primary goal, which is based on the sustainable and long-term climate change adaptation strategy, investments in large-scale afforestation, renewable energy and energy-efficient sectors, application of innovative and modern climate technologies, promotion of electric mobility and development of nuclear energy,” noted the President.