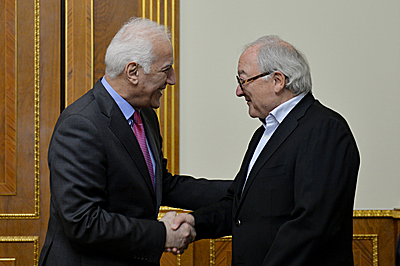 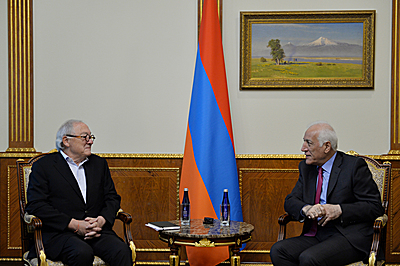 The co-founder of STARMUS festival, astrophysicist Garik Israelian was also present at the meeting.

President Khachaturyan welcomed the guest and warmly recalled their meeting in Yerevan last year when he was still the RA Minister of High-Tech Industry. "Our discussions in the near past have already become a reality today and Armenia has launched its first artificial satellite into space," the President said, noting that it was a very important step for Armenia.

Jean-Jacques Dordain expressed his gratitude for the reception and noted that he is very happy to return to Armenia, especially within the framework of STARMUS.

“This wonderful festival manages to gather scientists, musicians and many people from all over the world under one roof. This exceptional union forms innovation," he noted.

The former Director General of the European Space Agency noticed that Armenia is persistently making efforts to have its place and role in the field of Astronautics.

"During my stay here, I have met many students who are motivated and show great interest in space. I am confident that this will contribute to the increase of Armenia's capacities and productivity, which is undoubtedly important not only for Armenia but also for the whole world," said Jean-Jacques Dordain.

During the meeting, the sides exchanged thoughts on a number of issues related to the implementation of scientific and educational programs.