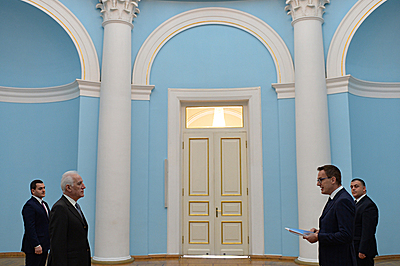 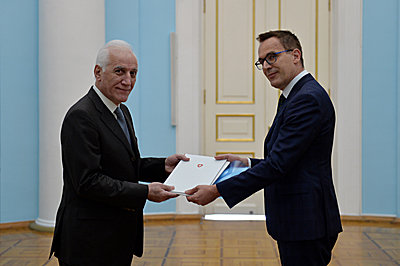 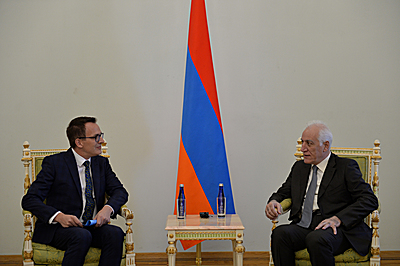 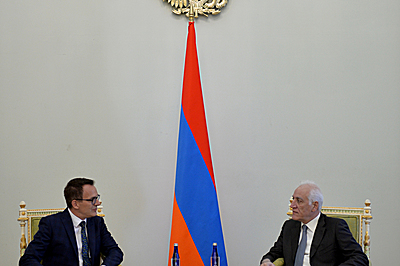 Today, the newly appointed Ambassador of the Swiss Confederation to the Republic of Armenia Lukas Rosenkranz presented his credentials to President Vahagn Khachaturyan.

President Khachaturyan congratulated the Ambassador and wished him fruitful work, assuring that he will use his long-term professional capacities in the best way to further strengthen and develop the relations between the two countries.

The President noted that this year is the 30th anniversary of the establishment of diplomatic relations between Armenia and Switzerland, and during these three decades, Armenian-Swiss relations have been distinguished by high-level political dialogue and close cooperation in many fields. According to the President, since the independence of Armenia, our people have always felt the support and help of Switzerland during the tough times in our country. The President highly appreciated the work of the Swiss Agency for Development and Cooperation, which implements various programs in Armenia, particularly in the fields of agriculture and the combat against corruption.

Ambassador Lukas Rosenkranz noted that it is a great honour for him to represent his country in Armenia and he will do his best during his tenure, to further strengthen and expand the already existing high-level relations. According to the Ambassador, there is a great potential for mutually beneficial cooperation in the fields of trades, advanced technologies, science and education. He noted that Switzerland is ready to double the number of existing projects, especially those aimed at the development of agriculture and the combat against climate change.