Armenia appreciates France's consistent efforts and your personal contribution to the settlement of the Nagorno-Karabakh conflict. President Armen Sarkissian sent a congratulatory message to Emmanuel Macron 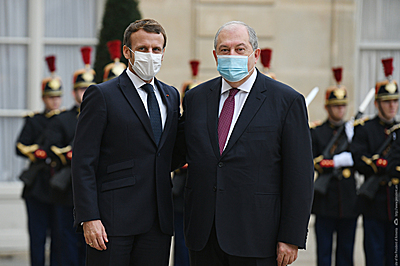 The President of the Republic of Armenia Armen Sarkissian sent a congratulatory message to the President of France Emmanuel Macron on the National Day of the French Republic.

"I warmly congratulate and send my best wishes to you and the friendly people of France on the National Day of the French Republic.

The centuries-old friendship between Armenia and France, the special relationship between our states, the high-level political dialogues, and mutual trust have an immense potential for the further development of the Armenian-French cooperation.

Armenia appreciates France's consistent efforts, and in particular, your personal contribution as the OSCE Minsk Group Co-Chair to the peaceful settlement of the Nagorno-Karabakh conflict for the sake of peace and stability in our region.

I hope that with mutual efforts, we will enrich the already comprehensive Armenian-French agenda with new ideas and initiatives.

I am full of hope that in the near future, we will have the opportunity to study specific cooperation programs, which we have had the chance to discuss on various occasions. I would especially like to mention the Presidential ATOM (Advanced Tomorrow) Initiative, food security, launching a “Small and Successful States Club,” Debt for Climate Change program, as well as the regional economic cooperation between the International Organization of the Francophonie and the Eurasian Economic Union.

I wish you inexhaustible energy and success and the friendly people of France progress and prosperity."