Vartan Gregorian was a devotee of his nation, a real patron of strengthening the Homeland-Diaspora ties. President Armen Sarkissian expressed condolences on the death of Vartan Gregorian 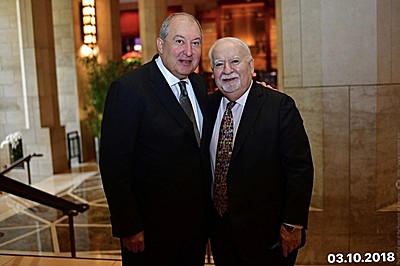 I received very sad news. My old friend Vartan Gregorian passed away. He was one of the brightest figures of modern American thought, and the Armenian world, who was devoted to education and culture, president of Carnegie Corporation of New York, co-founder of the Aurora Humanitarian Initiative, president of the New York Public Library, the first foreign-born president of Brown University, who had received the USA Presidential Medal of Freedom and was an old friend of mine Vartan Gregorian.

Vartan Gregorian, who a few days ago on his birthday, April 8, received a passport certifying his Armenian citizenship, was a devotee of his nation, a real patron of strengthening Homeland-Diaspora ties, evidenced by his pro-Armenian public activities. During our personal meetings and conversations, during numerous events in the Diaspora, I had had many occasions to see this myself.

I send my sincere condolences to Vartan Gregorian's family, relatives, and friends sharing their grief.